The Hotel as a Tale: Aigis Suites, Kea 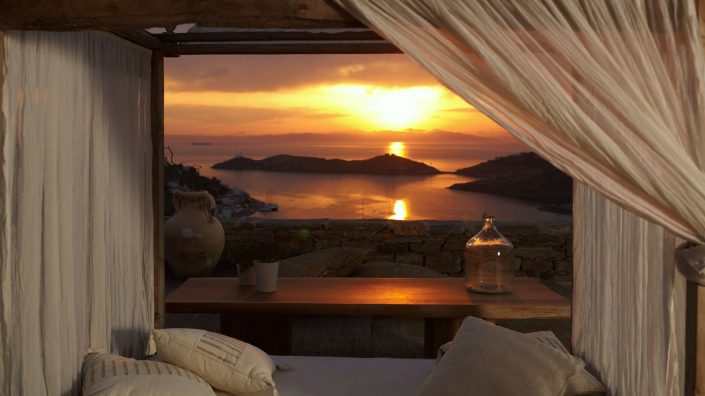 From Epicurus to Kea, From Indonesia to the Aegean Sea, From Hospitality to Love.

Every experiential hotel recounts two kinds of stories: a) the story that embodies in a scenographic way, namely how it was «born» and what is the unique concept that materializes, and b) the extraordinary personalized story that orchestrates for every single guest, a story always harmonized with the first major narration.

The first kind of story is the pictorial and architectural reflection of a narrative, a story that renders a hotel a storyteller.

The Hotel- Storyteller is a visual narrative section, a value added story in terms of emotions, indelible experiences, storytelling, identities, the indigenous cultural heritage, the character of the locality and the authenticity.
In this way, the experiencescape of the hotel, namely the landscape of its experience, and the design are not only profiling tools: the operational design is highlighted as a tool of great importance that enhances and even transforms the customer- service values. This engaging environment creates emotional drivers; in other words it urges the guests to want to buy and to live the experience and the myth of the hotel.

The Hotel- Storyteller has a dimension that is neither a service nor a product, but a mental construction, an immaterial substance that shapes it, distinguishes it and makes it stand apart from the competition (The Goring, London, for the «royal» hospitality that offers for 105 years now through its famous footmen, the Beverly Hills Hotel, LA, the exterior of which was painted, in 1948, in its distinct pink color to reflect the color of the sunset and that a little bit later became the cover of the Eagles «Hotel California» album, the Waldorf Astoria, NY, that invented the concept of 24-hour room service altering the face of hospitality forever or The Ritz London that was used as the meeting point by Charles de Gaulle, President Eisenhower and Winston Churchill during World War II).

A typical case of a hotel- storyteller that embodies an experiencescape of the same value, originality and inventiveness of hotel experience as the legendary hotels that we listed above.

An exhausted traveler arrives at Epicurus’
home, starving and with obvious the signs of discomfort.

Epicurus hastens to offer him a simple dish, a bowl with porridge. The foreigner, finishing his dinner, exclaims:

-This is the most delicious meal that I have ever had in my life.

-How could it be? It is just a simple meal.

– And what does it makes it special?

– The porridge tastes the same with or without a friend. But it has the greatest taste because you, my friend, validated my existence.

The antiquity of the hospitality and the famous epicurean care is conveyed today in Kea, 2317 years after that very first hospitality history ever recorded.

The renowned epicurean care and hospitality
That which understood the foreigner’s need and honored it, finds today its actual name and meaning at the Boutique Hotel «Aigis» in Vourkari, Kea.

«Aigis» was also the name of Zeus’ shield,

crafted by Hephaestus with Amalthea’s skin, the mythical goat of antiquity whose milk raised the Olympian god and god of Hospitality, Zeus.

A word and a hospitality culture entrenched in the Greek way of life since antiquity.

The story commences in 1995 when Aspiotis family returns to the roots of origins of Liza Morfonios’ mother in Kea and opens the legendary hub «Astra» (Stars) at the beach of Gialiskari; a family business that initially started for 40 days of work and pleasure on the magical beach that eventually became a reference point on the island.

The guest felt like going to a big party at a friend’s house by the sea. Fast forward to 2007, 14 years later, Lisa Morfonios and Takis Aspiotis‘ hospitality vision would become true.

A very special, then, cottage with bohemian-chic ambience was born. The construction is completed in just nine months. The seminal architectural study of the architect Christos Vlachos envisioned the hotel, designed it initially in free sketch, engraved it into the ground and completed the architectural masterpiece of Aigis.

Situated in the center of the triangular plot, right in the middle of the hug of St. Nicholas bay, a spatial hug, extension of the actual hug of the hospitality of the family.

The absolute precision, as experts of the kind said, architects from all over the worldº an accuracy almost impossible to be achieved with naked eye.

The continuous search for functionality and originality of the aesthetic approach of the space mingles with Liza Morfonios’ decorative aesthetics, two technical processes that were simultaneously materialized.

So, Aigis ends up in nine carved into the rock suites, a petite haven of care where the nature stars in tandem with vintage items and rustic style that embodies the local architecture and with originalities that include even some oblique walls that whereas they start being a meter , they end being on the ceiling 60 cm. Curved buildings are harmonized with the rocks while ornate doors hide the bathrooms highlighting them to the ultimate secrets of the room.. 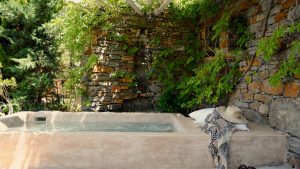 Lisa Morfonios and Takis Aspiotis travel to far Indonesia, Sri Lanka, Africa, Cuba, visit beaches, small workshops and warungs (the Indonesian huts) by the sea to transfer their experiences and craft all the decorative details of the hotel, handmade and of only one production ∙ from the doorknob to the grand entrance door.

Signature decorative touches reveal that each suite is a different thematic window to the Aegean Sea, placing emphasis on the feeling and the detail.

Every single small handmade detail in the suite, every object has its own story, a story that is reflected on small true tales like the way each water glass was manufactured for Aigis by a Balinese craftsman during the entire day, in his own hut with his big family.

The famous painter Alekos Fasianos, honoring his eight-year acquaintance with the family, endorsing the visual cues around the hotel, knowing that Aspiotis family will represent the hospitality of Kea and seeing in the hotel all the elements that were the base of his own creations too-the balance of luxury in the simplicity, the earthy materials, the warm hospitality and the tradition of the local civilization- he offers himself to become the artistic godfather of this new jewel of the Cycladic hospitality and creates the hotel logo. 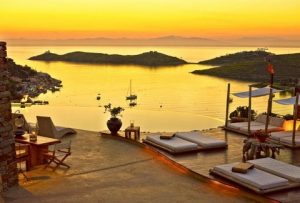 THE NATURAL AND CULTURAL HERITAGE OF KEA ENCLOSED IN A HOTEL EXPERIENCE
Aigis guests live experientially the island, pick up together with the owners cherries, grapes and ampourkounes from their field to make jams, participate in the major festivals and traditional customs of the island as a local family (decoration of the Epitaph, baking of buns, roast of lamb to name but a few), while enjoying naturalistic-wellness and sports experiences and seminars on love and mindfulness.

At the hotel’s restaurant that embraces the «Aegean Cuisine» movement, the owners revive the recipes of their grandmothers from the villages of Kea and exhibit fine dishes of Kean culinary treasures. Guests experience the food as a cultural experience.

YOUR VERY OWN » AIGIS » STORY
Each guest is invited to find his own reading in a small moment in the Aigis tale, his own spot where he felt the care that the hotel name promises: the moonlight in a corner on one of the pool couches, his own small blue paradise at a nearby beach that only few know and that the family recommended, the smells of the countryside coming through the window of the suite each morning, the naturalistic adventure when he walked with a hotel person an ancient path and enjoyed a picnic on the beach or the moment when he danced a romantic tango while the sun was descending beneath the Aegean scintillating waters…

Aigis will always be a hospitality storytelling suite and the colors, materials, textures, shapes, design of every little detail will represent a passion. And it will be the narrative canvas to recount a dream: the life in the Cyclades, a Blue Odyssey, a landscape of emotions, the Greece of Fasianos and Hatzidakis, a yard in the Aegean, a room next to the sea and a window open to awaken the love, moonlit nights with chill out music, a family table where guests are connected around the taste and the spatial backdrop that is set up by those little beautiful lyrics in Elytis’ Monogram «In the Heaven I have spotted an island. Same as you and one house at the sea«.